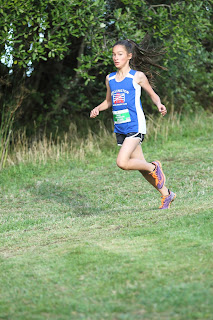 Results Daryl the Dude, professional finish line technician, was in his element at Saturday's Vosseler Shield. Not one to take half measures when it comes to capturing places and times he had a box of gadgets including 5 GoPro's all set up to make sure he got the data. Two co-opted teenagers captured some "verify point times" while the reliable John Turner and Dave Gratton did the manual stuff. And it didn't rain.

"Wellington Scottish produced a clean sweep of the main races at the Vosseler Shield on Saturday as Amanda Broughton and Tim Hodge claimed the senior titles.

Broughton held a steady lead over Olympic's Jo Crawford for much of the 5-kilometre race to win in a time of 23 minutes, 23 seconds. Crawford closed strongly to finish second, just eight seconds behind, with almost a minute back to her Olympic team-mate, Lizzy Bunckenburg, in third.

His winning time off 40.45 over the 10km course was three seconds quicker than his effort to win last year.

Scottish won both of the team races in those senior divisions.

In the women's under-20 race, Scottish's Jess Kikstra grabbed the closest win of the day as she beat Harrier's Kelsey Forman by just two seconds.

Those same club colours were to the fore in the men's under-20 race, with Scottish again the winner as Harry Burnard held out Rusi Jagose to win by eight seconds.


The NZ Mountain Running Champs in Queenstown was originally supposed to be all uphill, but because of the adverse weather it was changed at the last minute to make the finish safer. This meant the race was run over a circuit which included a downhill section and underfoot conditions described as wet and slippery in parts.


The course change may also have been why the most unlucky man of the day, Rusi Jagose of WHAC, went off course, possibly costing him a medal after ending up a close fourth.  Ordinarily a well-marked and marshalled course for a national event would prevent a wrong turn, but not in this case.
Dominion Post Report

Race 4: (Relay) Everybody Else