If anybody slipped over out the back of the course, then I missed it. Except for the shot of Martin van Barneveld below picking himself up after a slip just before the big hill climb. This year all of the jumps were amongst the trees making picture taking conditions very dull. So for the most part, I camped up at the top gate with a good view of the valiant hill climbing efforts. The view from the top is magnificent indeed and with the light drizzle the landscape looked like something that Constable would paint, if he were alive today.


Despite what appeared to be thin fields, there seemed to be some good racing across the grades.  As expected Wellington Harriers dominated the Junior Men’s grades while Scottish smothered everyone else in the Senior Men’s race. Kip Kemei was the first senior man home which is no surprise given that he has won every race started. I hope he is able to make it to the national XC event in Hamilton next month to continue his success. What would be even more interesting is whether he is able to make it to the National Road Relays which might give Scottish its best chance of winning the coveted national title once again. 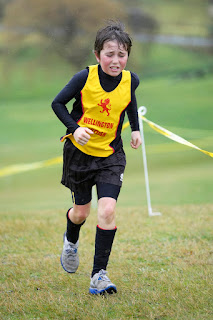 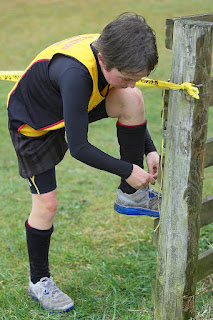 ....then it's time for a pit stop to tie up the shoelaces 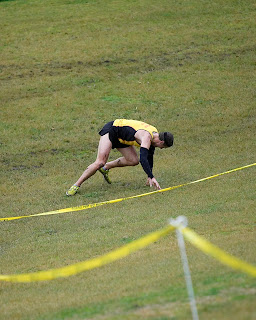 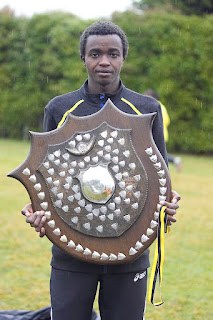 Kip Kemei with the Wellington Centre XC Championship Shield, retained by Scottish
Posted by rowang at 08:02 No comments: