In what must have been a nail-biting finish the Scottish Men's A team broke through on the last lap to take out the 2012 champions title with a resurgent in second.

Scottish won the title back in 2004 when in controversial fashion it was placed first after the Bays Cougars team was given a time penalty for running a short lap. This event was also contested on the roads of Nelson (including some dusty forestry roads) with orange cones were everywhere.

The comeback of New Brighton as a national force is significant because it was one of the clubs to beat in the late 70's and 80's.

Unfortunately National Road Relays results from last century are scare but here is a link to the results of the 1980 Wellington to Masterton event which in the A grade alone had 24 teams of 10 men.  The results are not the easiest to read but it includes many recognisable names. 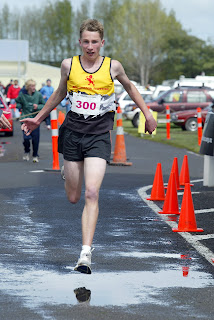 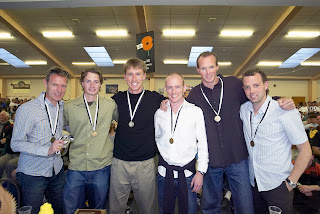 The winning 2004 Scottish Men's A Team in the National Road Relay, Nelson
Posted by rowang at 12:16 No comments: