The waterfront area is a popular area for locals and visitors with a high level of pedestrian activity. Because of this, holding any kind of sporting event in this area is organisationally challenging and poses hazards for athletes and the public alike. It is pleasing to report therefore that the 2011 National Road Champs turned out to be a well run and successful event enhanced by some reasonably good weather and competitive racing. 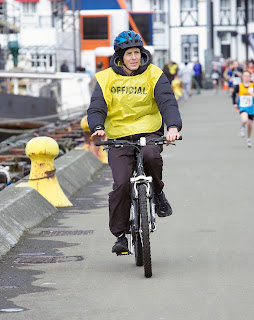 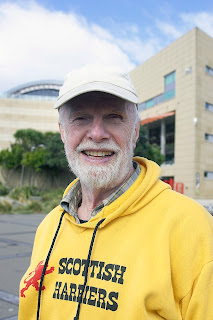 The story below about the inspirational Michael Browne (photo above) appeared in the Dominion on 22 August.
“He's known as Methuselah to his running mates, so it was no surprise to them when Michael Browne won the 80-plus title in the New Zealand Road Championships on the waterfront.

As it turned out, he was the only athlete in his category, but the artist – who was 's mile champion in 1951 – set an impressive time of 67 minutes, 21.7 seconds for the 10-kilometre course on Saturday.

"I know there are others out there my age who can run faster than me," he said. "My opponents tend to fall off the tree about now. I am getting quite used to that."

Wife Jenny has kept an eagle eye on her husband since he turned October last year. Age hasn't slowed him down much, though, despite the loss of sight in his left eye about five years ago. He still goes for a run three times a week around Point Jerningham from his home in .

He supplements his runs with regular swim sessions at the Kilbirnie Aquatic Centre.

A month ago, while out running in the company of three "beautiful young women runners" – including former world mountain running champion Melissa Moon – he was led astray, he said.

They took him into the trees on Mt . "I must admit I do have judgment problems these days. We decided we would run down the mountain running track which goes down to from the top of Mt .

"I found I could not slow down. I was running faster and faster and I knew I was going to crash. I told the girls I feel like I am flying and I don't remember much after that."

He fell among tree roots and pine needles and came to, with concussion, about three minutes later. "The ambulance people strapped me on a stretcher and took me off to A and E. At the hospital they told me, because you are older, we have to scan your brain. They scanned my brain and said, `That is very good. We could not find anything there at all'."

Since then, Mrs Browne has told her husband that cross-country running is strictly out of bounds.


And for his thrice-weekly training runs, she is on permanent standby. "I do insist on him telling me these days which way he intends to run round the peninsula. 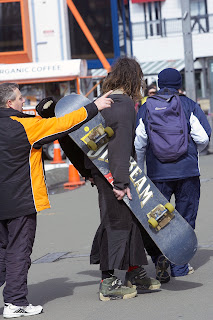 Toward the end of the racing programme a small drama occurred when the start of the walking race was disrupted by a skateboard toting Jesus Christ clone from Otaki. Unable to walk on water, or turn a 300ml bottle of beer into a keg, the guy focused on making a nuisance himself. The solution was to temporarily confiscate his skateboard and herd him out of harms way. No red squad batons needed.
Posted by rowang at 19:47 No comments: