Running icon and Scottish stalwart has passed away. While we knew this was coming it is a sad day for her family and the many others who knew her. Everyone will have a story about Bernie and former WHAC member and Kevin Norquay has written his piece below while Grant McLean has published his tribute on the Scottish website. RIP Bernie. 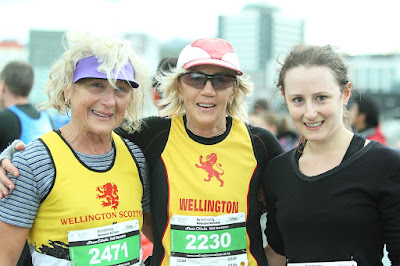 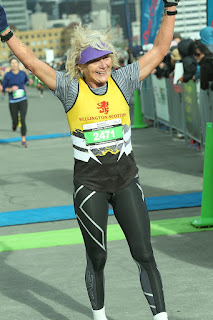 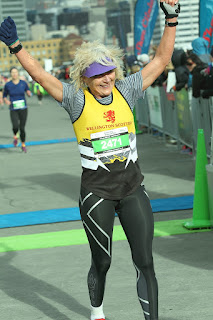 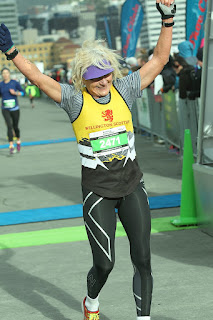 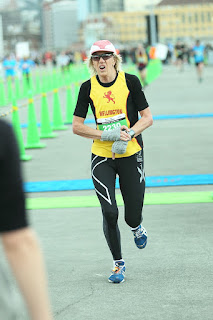 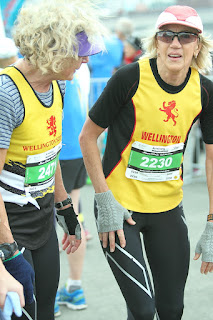 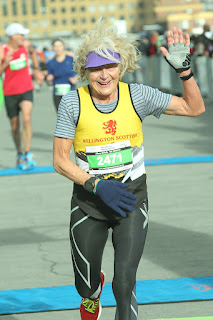 Stop all the clocks; the ever-running legs of record-breaking Wellingtonian Bernie Portenski have been permanently stilled.
For those who knew her, news of her death is hard to believe. Seemingly unstoppable, Portenski has been stopped.
Her trademark laugh silenced, the smile that lit up a room dimmed, her endless stream of encouragement and advice halted.

Ovarian cancer took her life at 67. The disease first came calling in May, three days before her beloved Rotorua Marathon, and in December returned with renewed vigour.
Portenski is survived by husband Pete Horan, daughter M J (Marie-Jo) and stepson Phillip.

.Portenski was the most unlikely of sporting heroes. A hairdresser and self-proclaimed party girl, she took up running at 30 in 1980, quitting smoking to train for a marathon, then discovering she had a talent for it.
So started a journey which led to qualification for the 1992 Barcelona Olympics, her proudest moment in sport (followed by one of lowest - the selectors did not pick her, deeming her too old at 42).
She broke world age group records, and won marathons across the world. In a stellar 1998 patch she won the Auckland Marathon, her New York Marathon age group and the Christchurch Marathon, all in three weeks.
On her 60th birthday she ran 60km. On her 65th she ran 65km, from Miramar to Eastbourne and back, raising money for Parkinson's disease sufferers.
Ad Feedback
But while statistics can measure those achievements, there are none that can capture the influence Portenski - the mother, the hairdresser, the runner, the personality - had on others.
When her daughter M J posted the sad news on social media on Wednesday her Facebook page was flooded with hundreds of messages of sympathy inside two hours.
Wellington Mayor Justin Lester too was swift to note her ability to inspire as he mourned her death on Wednesday.
"She had an infectious personality and was a positive, can-do person who inspired many others," he said.
"Local runners will know Bernie for her wonderful attitude and her boisterous encouragement. She was named Wellingtonian of the Year in 1998," he said.
"She was a great local character, a committed sportsperson and Wellingtonian, and we will miss her greatly."
When news broke last month Portenski was in a hospice, there was an outpouring from sports fans, hairdressers, and even those who had shared the Wellington Hospital cancer ward as her shadows grew.
In hospital Portenski helped her cancer-stricken cohorts by doing their hair and talking to them - one patient had to Google her to see who she was. While in the hospice she set about planning her own funeral.
She will have a private church ceremony and a public gathering at Newtown Park, where she ran lap-after-lap in training and athletics races.
Named Bernadine but known simply as Bernie, her death was mourned by her club Scottish Harriers, whose singlet she wore whenever not running for New Zealand.
"Today we learnt the very sad news of the passing of an inspirational woman and beloved Wellington icon Bernie Portenski," Scottish Harriers said.
"Her brave battle against cancer ended peacefully surrounded by her family. Our thoughts are with her family and friends at this difficult time."
Among her many other accolades were winning three Rotorua Marathons, twice completing an Ironman.
​"I was very proud of my three Rotorua Marathon victories ... that was a very special race for me. To win it three times was a bonus," she said in an interview from her hospice bed in January.
Of her 114 marathons, 33 were at Rotorua - cancer stopped her running there in 2016. In 1990 she ran it four months pregnant with M J.
Her effort of running 3 hours 1 minute 30 seconds at the Gold Coast Marathon in 2010 remains a world record for the 60-64 age-group, as does her 10,000m time, set in the same year, of 39min 4sec.
Portenski went into the hospice last month, where she was bedridden, yet upbeat, when talking to Stuff.
"Yes, I am quite busy, I'm kinda busy dying," she laughed, saying that planning for an undetermined date for her funeral had its problems.
"You can't plan anything in Wellington – barbecues, anything like that, dying – if you've got to get the right date, it's not the place to be.
"The weather's no different for what I'm trying to plan, and people who are trying to plan a barbecue."
She was still running her hairdressing salon from her Miramar home up until December.
Between 1994 and 2010, Portenski set New Zealand and world records and marathon bests in all master's grades from 40 to 60-plus.
By 2011, aged 62, she held four 55-plus age-group world records for middle- and long-distance running, and five world records in the 60-plus age group, including for the half-marathon and marathon.
And now the clocks have stopped for good. Bernie can rest, as hard to imagine as that is.