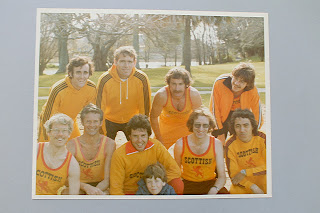 1980's Scottish C Team taken at the end of the Wairoa to Gisborne Relay
The national relay this year is back on the Takahe to Akaroa course. T to A is an enduring event which a long and colourful history. It is restricted to local clubs for 3 years out of 4 when it becomes the national course. I won’t be going this year but remember it as great event with some challenging laps.

Over the years many of the relays that used to form the backbone of the road racing season have disappeared mainly because of safety issues and new traffic planning requirements. In the Wellington centre there were two other important relays in addition to the short Bays Relay which started out as “juniors” only event. The Wellington situation was reflected in other provinces as well.

The Palmerston North relay and the Wellington to Masterton relay both significant and well supported events started in the morning with the first finishers coming across the line early to mid-afternoon. Each of relays have in the past been chosen to double as the national relay event. 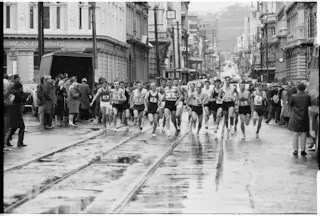 The start of the 1965 Wellington to Masterton Relay
Going even further back in time in Southland when I first started out in running there used to be an Invercargill to Winton relay put on a the start of the winter season as a purely local club event. It was pretty short as I recall. Also on the calendar was the Invercargill to Gore relay a longer affair which attracted teams from outside the province.
Full results and reports from these early relays are likely to be hard to find having being either lost forever or sitting at the bottom of a box at the back of the garage. It would be fantastic if some of this stuff could be found and digitised for the web.